A kampfgruppe from the division fought the allied landings at Anzio while the rest took part in the occupation of Hungary . It fought in Italy as a unit from May 1944 until being transferred to Hungary Feb 1945.

It surrendered to British forces near Klagenfurt at the end of the war. 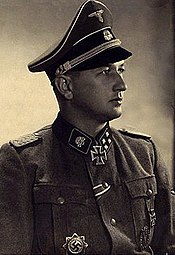 After attending SS-Junkerschule Braunschweig's first class in 1935, Baum was posted as a Zugführer with 5/Germania. In 1938 he moved to Regiment "Der Führer" as a Zugführer with 12.Kompanie and later moved to the "Leibstandarte" as 7.Kompanie Chef and fought in the western campaigns with LSSAH. In March 1941, he transferred to "Totenkopf" Division as a Battalionskommandeur and at this position won both the German Cross in Gold and the Knight's Cross. In 1943 he was promoted, and took command of SS-Pz.-Gren-Regt. 5 "Totenkopf" and during battles in February and March was awarded teh Oakleaves. In March 1944, he was placed in reserve until June, when he took command of 17.SS-Pz.-Gren-Div. "Götz von Berlichingen" which he led through July. He took command of Das Reich after Tychsen's death and lead the division until replaced by Lammerding. He was awarded the Swords for his actions with Das Reich during the Falaise encirclement, in which his bravery lead to the escape of large numbers of troops. He ended the war as commander of 16.SS-Pz.-Gren-Div "RFSS".